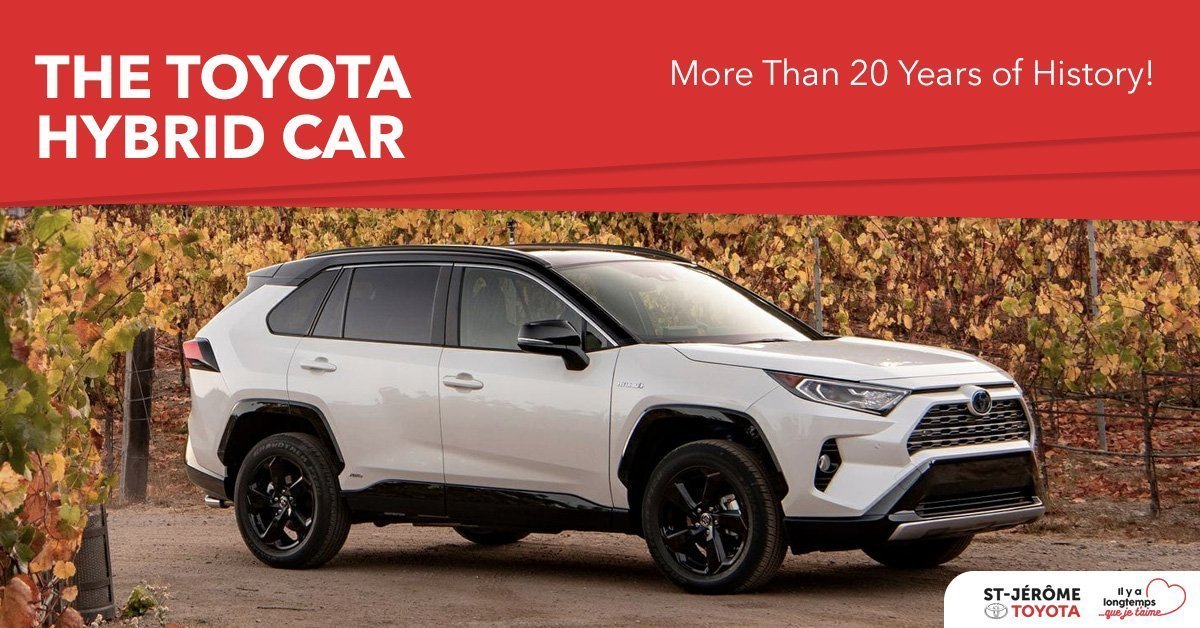 In 1997, the Japanese automaker Toyota launched its first hybrid vehicle, the Prius - more than 20 years later, the Prius is still on the road. In addition, other plug-in hybrid vehicle models have also been developed. Toyota has become a leader in hybrid cars, including crossover and SUV vehicles.

Your Toyota Laurentides dealership in Saint-Jérôme near Laval on the North Shore offers a full range of hybrid and electric vehicles.

A Beautiful Story to Tell!

Since 1997, the international company located in the city of Toyota in Japan has been focusing its energies on new advanced technologies. However, the Japanese manufacturer is certainly a leader in the field of environmental protection and the fight against greenhouse gases (GHGs).

The company's engineers have developed an impressive range of plug-in hybrid cars. Today, their hybrid vehicle is available in multiple versions and its list of achievements is impressive - think the Prius, Camry, RAV4, Highlander and the all-new 2020 Corolla Hybrid. These embody Japanese ingenuity at its finest, and upcoming features will continue to inspire Toyota for years to come.

Thanks to the evolution of the Synergy Drive hybrid system, Toyota is now a world leader in hybrid cars. As soon as it was launched, the Prius was named New Car of the Year in 1997 and 1998. Subsequently, this car was sold on a large scale all over the world. Consumers were quickly won over and the Prius evolved with an upgrade of its hybrid system from THS to THS II and a higher performing electric engine.

From 2010 onwards, the Japanese auto maker accelerated its production of hybrid vehicles. Over the years, it rose to the top of the list and by 2016, Toyota was selling 80% of the world's hybrid vehicle fleet. This figure is impressive and shows that the Japanese manufacturer's progress has paid off.

Today, the range of hybrid vehicles is impressive. The Prius model is now available in Prius C, Prius V and Prius Prime versions. The 2019 Prius is both a sporty and fuel-efficient hybrid car. The 2019 Prius C is a sub-compact sedan that offers space for 5 passengers. It is elegant, high-tech and equipped with an advanced safety system called Toyota Safety Sense (TSS-C+). The Prius V is a hybrid crossover that is both energy-efficient and family-friendly with plenty of space for storage. Finally, the 2019 Prius Prime has an avant-garde style. This pluggable hybrid can take you further.

What's more, with the 2019 Hybrid RAV4, we dare you to stretch your limits and seek out new adventures. It is part of Toyota's hybrid SUV line-up and is ideal for long-distance driving throughout Quebec, Canada and the United States. It is sporty, powerful and energy-efficient.

The 2019 Hybrid Camry has won several awards as a vehicle that transforms the driving experience. It is powerful, efficient and luxurious. This exceptional sedan will knock your socks off.

The 2019 Hybrid Highlander is ideal for the family. It offers a wide range of models including 7 or 8-seat versions. This SUV offers many advantages in terms of safety, performance and long-distance driving. With a net power of 306 horsepower and a continuously variable transmission, you'll be equipped your next great family adventure.

Finally, the latest addition is the 2020 Hybrid Corolla. This compact sedan is making its triumphant debut at Toyota St-Jérôme. With its distinguished silhouette and sleek lines, the Corolla is legendary for its reliability and durability, and is now available in a hybrid version.

Toyota St-Jérôme: A Leader in the Laurentians

Hybrid models are under the spotlight at Toyota St-Jérôme, an experienced dealer in the Laurentians only a few minutes from Laval and Ste-Agathe-des-Monts. They offer reliable vehicles carefully developed by experienced and forward-thinking engineers. Since Toyota has been selling hybrid vehicles for more than 20 years, reliability is guaranteed.

The Toyota St-Jérôme team has extensive knowledge of the hybrid system powering these vehicles. They know that this technology has proven itself. They can guide you through the decision process. Come and meet our team of experts and advisors now and test drive your next hybrid vehicle. These are the vehicles of today and tomorrow. Toyota is proud to contribute to improving the environment and is constantly striving to surpass itself. A 2019 or 2020 hybrid vehicle is here waiting for you!

Close
Your request was sent successfully!

SUBMIT
Your request was sent successfully!

It looks like you are using a deprecated browser, which might encounter problems properly displaying this site. For the best browsing experience, we recommend switching to Google Chrome.