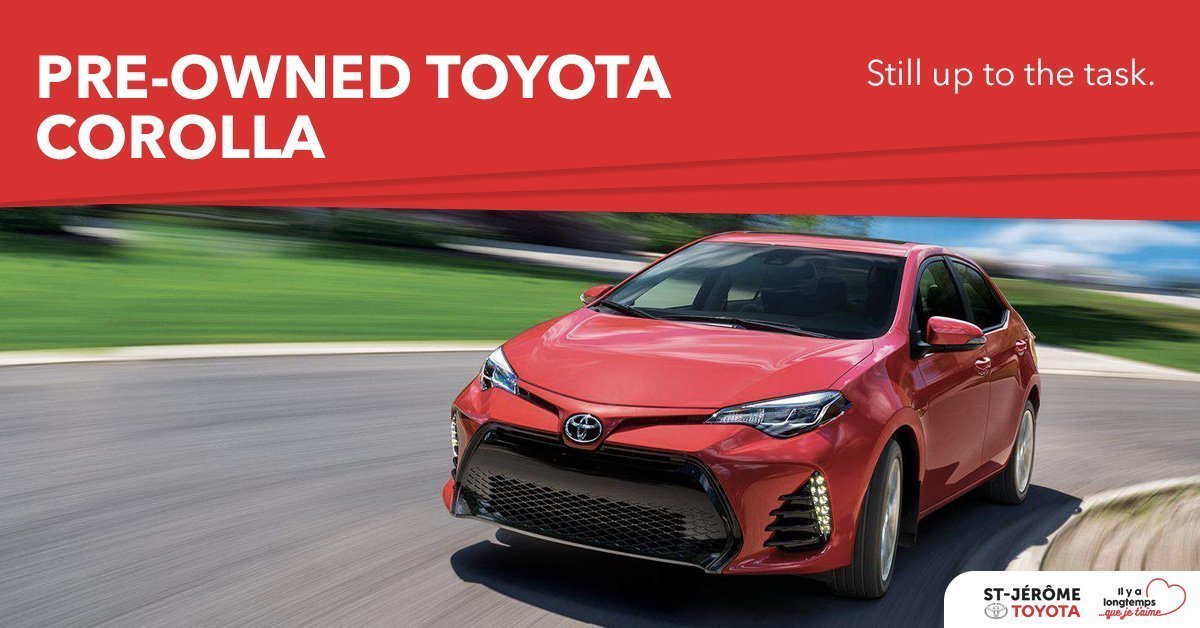 Toyota vehicles are all recognized for their longevity, their durability and their reliability. Whether they be new or pre-owned, Toyota has excelled for decades in terms of excellence and sees itself awarded prizes year after year on a global scale.

St-Jérôme Toyota is not only a new and used Toyota brand car dealership, it’s also your best advisor when the time comes to make the acquisition of a new vehicle. In Saint-Jérôme, at the door of the Laurentians near Laval and Montreal, the team in place fully knows the Toyota products and will know how to guide you in the purchase of your next pre-owned Toyota Corolla vehicle.

Why a Pre-Owned Corolla and not Another Brand?

When we evoke the name Corolla, we immediately think of a vehicle who has withstood the test of time. The drivers will tell you, never have they felt such in confidence while driving this Toyota. The Japanese designer understood this well and, year after year, since 1966, he hasn’t stopped innovating to make this vehicle more and more reliable. Furthermore, the Corolla always remains a winner with its elevated resale value and offers excellent gas savings.

By the way, the interior of the Toyota Corolla remains luxurious with a refinement in the choice of the materials used. Its cabin is spacious for a vehicle in its category, it is pleasant and user-friendly. The back-leg room is another plus for the Corolla.

In short, the Toyota Corolla remains spacious, comfortable and sporty, not to mention its electronically adjustable heated seats, its heated mirrors, its decent-sized sunroof, its electric windows, its reverse camera, its adjustable steering wheel with its easy-to-use commands. And what can we say about its attractive and pretty dashboard, its state-of-the-art navigation system, its storage spaces, its innovative infotainment system, its Wi-Fi connectivity, its USB ports, and much more! It makes you want to go on an adventure in Quebec, Canada and, why not, in the United States.

Choosing a pre-owned Toyota Corolla is also betting on the extension or the balance guarantee offered by the designer. It’s also obtaining a vehicle with the lowest cost in town. Thanks to its pre-owned vehicle program, St-Jérôme Toyota ensures you that all its vehicles have been inspected from A to Z and that they benefit from the CarFax certification. This vehicle history report will be handed to you by the Toyota dealership. Even more interesting, St-Jérôme Toyota ensures you of the best financing rate on the market with its pre-owned Toyota Corollas in stock along with enticing promotions.

The pre-owned Toyota Corolla is a jewel of reliability on the road. You will take pleasure in driving it since it goes everywhere with a low gas consumption. Since they are vehicles that last for a long time, the Toyota Corolla does not go out-of-style. It is by the way offered as a sedan or with a sportier look. A hatchback version is presently on the market and gives even more relief to this legendary vehicle. If we often compare the Toyota Corolla to the Honda Civic, know that the Toyota roams our roads since 1966 and that the Honda Civic has done so since 1972. The Japanese designer Toyota has always shown itself as more avant-gardist than its Honda rival. This is even more true these days, especially when we examine the impressive range of Toyota hybrid vehicles comparatively to Honda. By the way, the Corolla is now offered as a hybrid version as well.

Thanks to its energetic design, which has known numerous modifications over the last 50 years, the new or pre-owned Corolla seeks to surprise us and comes and get us. There is no doubt that the decision to opt for a Toyota Corolla constitutes a hyper logical choice. For all the reasons mentioned in this article as well as others, it matters to seriously consider the pre-owned Toyota Corolla during your next purchase.

St-Jérôme Toyota, a Vast Inventory for You!

Exclusive dealership for decades at the gateway of the Laurentians near Terrebonne and Laval, St-Jérôme Toyota disposes of an impressive inventory of Toyota vehicles. Among the varied range of pre-owned vehicles, pre-owned Toyota Corolla constitutes an emblematic figure.

It’s not for nothing that the St-Jérôme team invites you to come and see up close our pre-owned Toyota Corolla models. These are presently showcased including a good number with little mileage, often around 50,000 to 90,000 km or less. They are excellent reliable vehicles that illustrate themselves perfectly year-round with confidence and maneuverability. Their user-friendly driving will bring you far, very far. Come discover all of our pre-owned Corolla models on sale now and leave with a vehicle which has made the envy of millions of persons in North America.

SUBMIT
Your request was sent successfully!

It looks like you are using a deprecated browser, which might encounter problems properly displaying this site. For the best browsing experience, we recommend switching to Google Chrome.