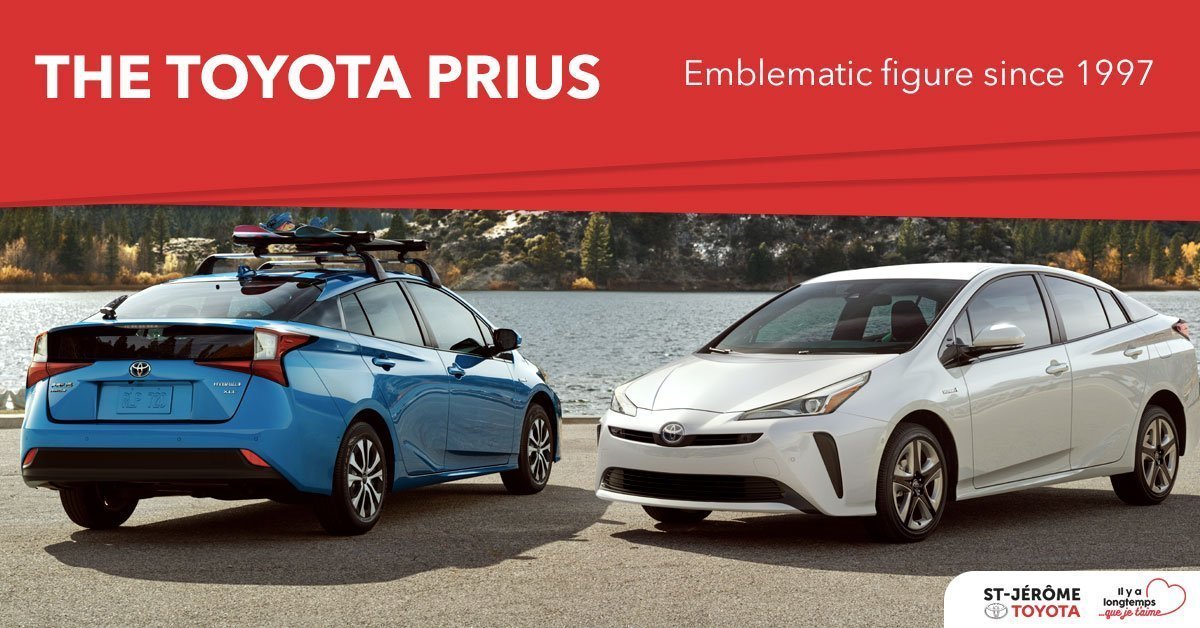 The year 2019-2020 shapes itself under the sign of an explosion of hybrid vehicles in the global market of automobiles, and this upwards spike is also observed in Canada and Quebec. This tendency occurs more and more in the North American and European markets, along with electric vehicles. Toyota Canada registers a rapid evolution in its hybrid and electric vehicles’ sales and has built more and more of them over the last 10 years. This blog tries to answer the two questions that often come back inside the customers’ heads: why choose this type of vehicle in 2019-2020 and why choose the Toyota Prius?

Why choose a hybrid vehicle?

First of all, you should know that these vehicles fall in line with a new way to perceive the driving of a vehicle, taking into account the fact that they are part of a new lifestyle and slide into a bigger perspective.

Indeed, the hybridization is a combination between gas and electric engines, a very important step in the greener approach at Toyota. The functioning of hybrid vehicles is relatively easy, whereas when the electric engine has depleted its charge, the gas engine immediately takes over. With this knowledge in hand, the driver can cover long distances without having to worry about refueling.

Something even more spectacular, hybrid vehicles at Toyota recharge themselves while driving, which means that they never have to be plugged in. They consume little and possess the same characteristics as the other Toyota vehicles, such as the technologies in terms of security, the Toyota Safety Sense 2.0, as well as the power and the performance. Toyota hybrid vehicles are performant, audacious and cutting edge.

Today, we turn ourselves towards the hybrid vehicle thanks to Toyota’s innovative ways. For many years, they have cared for the environment and sought new ways to reduce greenhouse gases and improve air quality. Since 1997, their work has paid off thanks to their hybrid line up, which prevented the emission of more than 95 million tons of CO2 on a global scale, while also knowing that no less than 12 million Toyota hybrid vehicles have been sold on the planet. This number is destined to grow rapidly in the next few years and it’s also no coincidence that Toyota hybrid vehicles appear in the top-10 list of most sold hybrid vehicles in the country.

By choosing a hybrid vehicle, you opt for a better quality of life. By reducing your carbon footprint for each road kilometer you drive, you make a tangible act to improve the environment. Also know that hybrid vehicles do not make you change your driving habits, nor do they change the way that you refuel them, but they allow for a greener usage on the roads of Quebec, Canada and the United States, since they are clearly more ecological than conventional vehicles. A survey realized at the end of 2018 for the account of electric vehicles in Quebec (AVEQ) mentions that 64% of Canadians wish that electrical vehicles, or even hybrid ones, would replace the conventional gas vehicle market within the next 10 years.

Lately, I had a random discussion with the driver of a Prius. He was coming out of his vehicle and I decided to go and chat with him. He told me that this was his third Prius and that he wouldn’t part with it for all the gold in the world. He regularly visits his family and must travel over a 1,000 km for a round-trip. Thanks to this hybrid, he only has to fill up his car once.

Even more spectacular, if possible, is the fact that his Prius costs him next to nothing in maintenance repairs. He also said that the battery of the Prius is much more performant than most. He also mentions that the longevity of the battery testifies of the durability of Toyota vehicles. No matter how he looks at it, he doesn’t consider for one second finding a better hybrid vehicle on the market.

After this little chat, I decided to dig even deeper about the Toyota Prius and I learned that it has been on the market since 1997. It was first commercialized in Japan before being released in the rest of the world in 2000. It is one of the cleanest vehicles sold in North America, based on its greenhouse gas emissions.

This sub-compact hybrid sedan is now the biggest seller in the world. In 2018, nearly 4,3 million units had been sold across the planet.

Right from the start in 1997, Toyota was visionary for choosing to put on the market a hybrid vehicle bearing the name Prius, which translates to ‘’first’’, ‘’original’’ and ‘’superior’’ in Latin. Twenty years later, the Japanese builder is top of its class with the Prius.

It’s important to know that back then, the Prius became the first gas/electric car to be mass-produced in the world. Successively winning the awards of car of the year in Japan and car of the year in the research group in 1997 and 1998, the number of units on the market neared 37,500 in 2000.

Two models were put on the market between 1997 and 2003. The style of the NHW10 Prius, only available in Japan, has been produced by Californian designers recruited by Toyota. The NHW11 Prius became the first hybridized model sold outside of Japan, which includes the United States and Canada. This Prius created an instant craze among the population, based on its higher speed and its long-distance capabilities. It’s actually this model that enabled Toyota to reach its threshold of profitability and become the pioneer for hybrid vehicles in the world.

With the second generation, which extended from 2003 to 2009, we witnessed the appearance of the NHW20 model, which is a complete redesign of the precedent model. From there on, the Prius offered more leg and storage room. The second generation Prius is also much more ecological and it is longer than the NHW10 model. In 2004, the Prius NHW20 was classified as a SULEV vehicle, which stands for Super Ultra Low Emissions Vehicle. In 2007, the Prius took over the Chinese market and Toyota registered a record number of units sold, which was over 1,1 million.

With the third generation, which went from 2009 to 2015, Toyota pursued its innovations by introducing 3 optional driving modes: the EV mode for low-speed functioning (electric only), the Eco mode for optimal energy efficiency, and the Power mode for added performance. The body comes in a more aerodynamic format, a new platform allows to increase the length, and the materials used are lighter. Finally, a fender arch gives the vehicle more stability at higher speeds.

The Prius C is a sub-compact hybrid vehicle which offers room for 5 occupants. It also has a youthful look, possesses innovative technologies and a set of advanced security systems. It consumes as little as 4,5L/100 km in the city and 5,5L/100 km on the highway.

The Prius V is an eco-energetic multi-segment hybrid that offers you an interior axed on family with loads of leg and storage space. Its consumption is of 5,5L/100 km in the city and 6,0L/100km on the highway.

Finally, the Prius Prime, a rechargeable hybrid, has a progressive style, possesses numerous state-of-the-art technologies which will bring you very, very far…It consumes as little as 4,3L /100km in the city and 4,4L/100km on the highway.

In 2019, a study realized by iSee Cars has ranked the Prius second in vehicles kept the longest by American drivers. This data also coincide with the testimonies given by Prius drivers in Quebec.

On a final note, Toyota has brilliantly rose to the hybridization challenge and has joined with confidence in the development of highly eco-energetic new vehicles. The combination of a gas engine with an electric engine constitutes a very interesting tendency in the automobile industry.

From here on, the Hybrid Prius is useful both in the city and on the highway. The longevity of the lithium battery (ion lithium) allows to cover long distances. Furthermore, the power and performance are a constant in today’s hybrid vehicles at Toyota. Without a doubt, the 2019 Toyota Prius is a vehicle with a great future. After more than 20 years on the market, it is still prized by numerous international associations and constitutes the car of today and tomorrow.

It’s no mere coincidence if we are located at the gates of the Laurentians, near Sainte-Agathe-des-Monts, on the North shore of Montreal. Indeed, we truly care about the quality of the air we breathe and the environment.

Whether it’s the 2019 Prius, the Prius C, the Prius V or even the Prius Prime, we have the most eco-energetic vehicles on the market and we know we are best suited to improve the environment on our roads.

Toyota Saint-Jérôme hybrid automobile is a leader in the sale of new and used hybrid vehicles in Quebec. Thanks to a great service, a dynamic team and counselors brimming with talents, we know the customer is important to us. The competency of our dealership is confirmed by the fidelity of our clientele. Over the years, we have served thousands of clients who keep coming back for more.

Our recipe is pretty simple: quality before anything else. It’s important for us to make sure we thoroughly understand the needs of our clients. We take the time to listen to them carefully and to present them with the options that best meet their requirements. Since we are anxious to give an impeccable service, we make sure that we answer all of your questions and offer you the best promotions on the market.

By choosing Toyota Saint-Jérôme, you choose quality, people who listen, and the best advice. Moreover, by opting for a 2019 Prius, you will obtain the best discounts and you won’t even think about changing model for a very long time. Prius is synonym with superior quality, durability and reliability. It’s the best eco-friendly vehicle out there, and it has been for the last 20 years. Come try out your next 2019 Prius and you will leave feeling like a winner. See you soon!

Your message was successfully sent!

Thanks! A representative will contact you shortly to present your with your credit potential.

×
Continue
Your request was sent successfully!